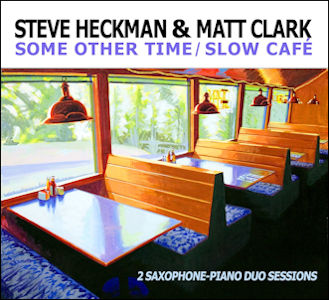 The album includes 4 originals (3 by Steve, 1 by Matt), as well as 8 standards, including a number of relatively rarely- heard tunes such as Monk’s “Ugly Beauty”, Duke Pearson’s “Is That So?” and Fred Lacey/Mark Stevens’ moving tribute to the late alto saxophonist Ernie Henry, “Theme for Ernie.” “Some Other Time”, one of Leonard Bernstein’s most beautiful popular songs (co-written with Betty Comden and Adolph Green) is the centerpiece of one of these 2 sessions, performed here with delicacy and finesse, and capturing the almost timeless mood evoked by the song’s title. Also presented in an impressionistic fashion is Jimmy Rowles’ gem, “The Peacocks”, while interspersed among these more introspective pieces are a number of up-tempo explorations including the burners, “Get Happy” and “Jeannine”, as well as an up-tempo version of the standard “I Should Care.” Notable among the original tunes are 2 waltzes, including Matt’s haunting “Foregone Conclusions” and “Sheila’s Sunday Song”, written by Steve, as well as Steve’s tribute to one of his influences, Lee Konitz (“Admiring-Lee”). Slow Café, the other centerpiece, offers a marked departure in that it is a funky, Gospel-influenced original by Steve, which fits well as a concluding piece to this satisfying set of material.